The Good News of Resurrection!

Deacon David Previtali · The Good News of Resurrection!
Homily for Easter, Gospel: John 20:1-9. Theme: The Good News of Resurrection!
Our Easter celebration places before us the central truth of Christianity: the real, historical, physical Resurrection of Jesus of Nazareth. It’s a strange thing, indeed, to believe that a man who was tortured, killed and buried, has risen up to more a powerful, glorious and real life. But this is precisely the unique Good News of Christianity: that Jesus of Nazareth, the Son of God and Savior of all people, has risen from the dead and by doing so, has banished the fear and finality of death for those who follow and trust in Him.
There have been many religious figures the world, but the Resurrection sharply distinguishes Jesus from all the others. No one else claimed to be what Jesus said he was. No one else claimed to be more powerful than death itself. The Buddha was cremated and interred in Kushinagar, India. The Old Testament tells us that the grave of Moses is near Mount Nebo, in Jordan. Confucius is buried in the Shandong province of China. Muhammed is buried in Medina, Saudi Arabia. But where is the body of Jesus of Nazareth?
As we heard in the Gospel, the tomb of Jesus was found empty. According to the eye witness experience of over 500 people during the 40 days after that first Easter Sunday, he was alive…risen…glorious…immortal. They saw him, touched him, spoke to him and ate with him. If their experiences are true…then it means that Jesus was indeed who He said He was: God actually come among us in the flesh as one of us. And it means that Easter is a total game-changer in human history and for each human life.
However, it takes more than just hearing to truly enter into what the Resurrection means. There were a lot of people in Jerusalem for the Passover on that momentous Easter morning. Many were still asleep when the Resurrection happened. Others would hear about it later on, as the day and the week wore on. And for most, it was just crazy gossip in the marketplace and never effected their lives. But for others, this news of Resurrection would change them from the inside out and they would never be the same. And you know, this variable reaction to the news of Resurrection is still happening today.
There are those who hear the Good News yet it remains nothing more than a story to be told and retold every Easter. It never really touches their lives. And there are others who hear the news of the empty tomb, who ponder the experience of the holy women, and who receive into their hearts the words of the angel that “He is not here. He has been raised.” They experience a hope beyond hope that leaps up from deep within them and often can barely explain how it is that they came to believe and are changed!
Why such a different response to hearing the very same message? Because faith in Jesus and in his Resurrection, is a supernatural gift. It is not something we can make happen, nor is it something we can purchase or earn. Faith is not something that we can inherit simply by having been raised in a believing family. It’s a gift that is offered by God to everyone without exception, but it can only be activated and become meaningful to us by an individual’s personal response of trust in Jesus.
And once this happens, the Risen Lord opens our minds to the truth about who he is and he sets us free from the inside out. We begin to really see that there is a much bigger picture to the reality of our existence than only what we experience here on planet Earth. We profess faith in eternal life after death, knowing that it is not just a ‘maybe” or a “hope so”. That it’s not just fantasy nor wishful thinking. We are convinced of it because of what happened in Jerusalem 2,000 years ago and still continues to happen today!
Through our personal relationship with the Risen Lord, we are not only freed from death’s dark domain, but also from its companion which is paralyzing fear, a fear we have sadly seen way too much of in these days of the coronavirus. We who trust in Jesus refuse to give such fear a significant place in our lives, causing us to live and act as if we were still under the powers of darkness and death. Those who live in such fear act as if death still has the last word and so they become silent in the face of it, not knowing what to say, as if they are still its victims, its captives.
But we who are Christian are not silent in the face of fear and death. We know what to say in the face of fear! We know what to say in the face of death! We profess that Christ’s love casts out all fear! And so, we speak out and we even sing aloud: Christ is risen indeed! Alleluia! Death has been conquered once for all! Alleluia! 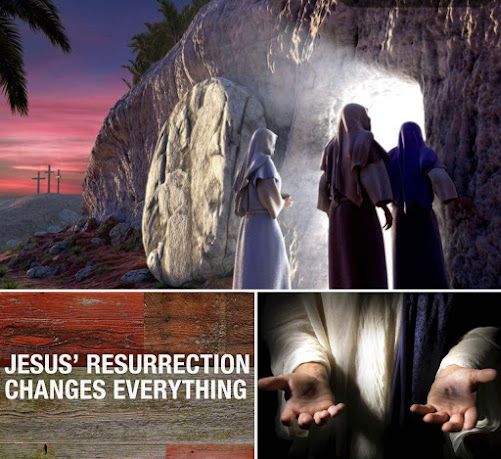